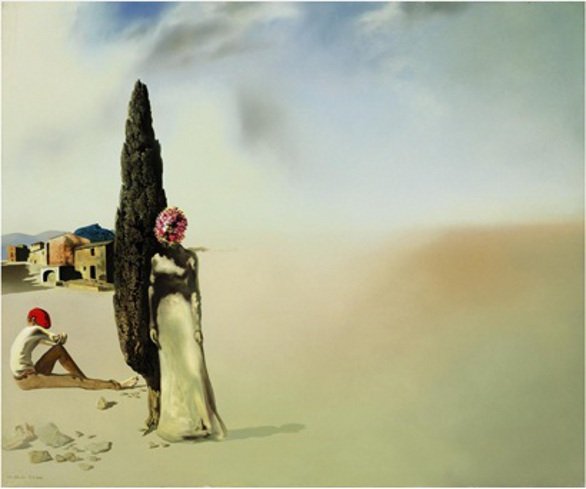 NOTA DEL CATALOGO
A masterwork of Surrealism, Printemps nécrophilique embodies the ineffable mystery so particular to Dalí's oeuvre.
As early as 1928, the artist had embraced Surrealism as evidenced by early masterpieces, including Portrait de Paul
Éluard (fig. 2). By the time he painted this work in 1936, he had established the style and the personal iconography
that characterizes his most successful compositions. The eerie infusion of dreamscape with hyper-real figural
elements is a hallmark of Dalí's approach. The voice which he gives to the subconscious world is at once personal
and universal. The current work, painted at the height of his most creative years in Paris, exemplifies his unique
aesthetic at its most refined and sensational.
Dalí depicts two figures in this work that offer a confounding combination of anonymity and specificity. He envelops
the figures of Printemps nécrophilique in a wide expanse of plains and sky, reminiscent of the endless landscape
surrounding Figueres which figure prominently in recollections of his Catalan youth. The lithe and graceful male figure
at left recalls the artist's own profile, which will appear again in the artist's masterpiece painted the next year,
Métamorphose de Narcisse (fig. 4). The flower-headed dominant female figure is one of the artist's most memorable
characters, appearing in significant compositions such as Femmes aux têtes de fleurs retrouvant sur la plage la
dépouille d'un piano à queue and staged in London for the 1936 International Surrealist Exhibition (fig. 1).
The single cypress tree which unifies the two characters in this work signals the obsessive fixation which the artist had
with Arnold Böcklin's mysterious painting from 1880, The Isle of the Dead (fig. 3). The sense of foreboding imparted
by these trees in Böcklin's masterwork transfixed the young Dalí as did the bold frontality of its composition. In his own
words, he was fascinated by the "antagonism between the feeling of death and the absolute lack of anxiety as to
notions of space, so striking with this painter" (quoted in Dalí (exhibition catalogue), Palazzo Grassi, Venice &
Philadelphia Museum of Art, 2004-05, p. 170). Dalí draws these tensions from Böcklin's painting and uses them to
endow Printemps nécrophilique with a sense of inexplicable yearning.
Though Dalí spent much of the 1930s among the Parisian avant garde, ties to his homeland of Spain were strongly
felt. When he painted the present work in 1936, he was aware of the rising tensions in Spain under Franco's regime.
Looking back on these early years of the Spanish Civil War, Dalí wrote in The Secret Life of Salvador Dalí, published
in 1942: "The civil war had broken out! I knew it, I was sure of it, I had foreseen it! And Spain, spared by the other war,
was to be the first country in which all the ideological and insoluble dramas of Post-war Europe, all the moral and
esthetic anxiety of the 'isms' polarized in those two words 'revolution' and 'tradition' were now to be solved in the crude
reality of violence and blood" (reprinted in Dalí (exhibition catalogue), op. cit., p. 460).
Throughout this period, the artist was championing his "paranoiac-critical" method - his term for the controlled use of
freely-associated imagery and subjects derived from self-induced hallucinations. There is a distinction to be drawn
between this method and the automatism of many of his fellow Surrealists. Whereas automatism relies on unreflecting
response to stimuli and chance occurrence, Dalí's approach to the irrational was highly planned and manipulated to
fulfill a pre-established conception.
Dawn Ades writes of the artist's unique iconography, "...Dalí increasingly persuaded himself of the imperative to make
his paintings as convincing, deceptive and illusionistic as possible. His aim, put crudely, was to give form to the
formless and invisible, to dreams, reveries, delusions, desires and fears. His ambition, both in what he was aware of
depicting and what remained fortuitous and concealed was to make the world of the imagination 'as objectively
evident, consistent, durable, as persuasively, cognoscitively, and communicably thick as the exterior world of
phenomenal reality.' His desire to give substance to the phantoms destined always to remain virtual led to one of the
most sustained investigations into the relationship between vision, perception and representation of the century" (D.
Ades, "Dalí's Optical Illusions," in Dalí's Optical Illusions (exhibition catalogue), Hartford, Wadsworth
Atheneum; Washington, D.C., Hirshhorn Museum and Sculpture Garden & Edinburgh, Scottish National Gallery of
Modern Art, 2000, p. 10).
The first owner of the present work was Elsa Schiaparelli, an elegant couterière active in Paris during the first half of
the twentieth Century. Schiaparelli staged momentous events in Paris and occasionally collaborated with Dalí - their
work together is explored in detail in a current exhibition at the Metropolitan Museum of Art in New York, Schiaparelli
and Prada: Impossible Conversations. She designed a dress inspired by the female figure in Printemps nécrophilique
, in which "the boundary between clothing and flesh has dissolved making it impossible to distinguish one from the
other" (Dalí (exhibition catalogue), op. cit., p. 458).